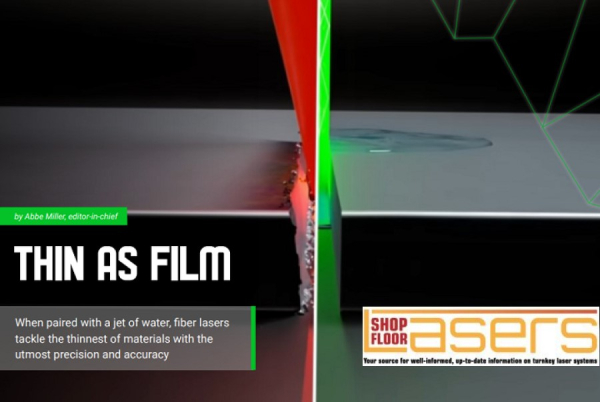 The US magazine Shop Floor Lasers, which is dedicated to laser technology in manufacturing, writes in its article "Thin as film" about the possibilities and advantages of the LMJ technology in thin-film markets and reports on customer applications and experiences:

"In the world of metals fabricating, processing thin materials can pose a challenge – with heat input being one of the main assailants to material composition and integrity. Medical component manufacturers that produce stainless steel stents know this challenge well. Compared to traditional metal fabricators that process material measuring in millimeters or fractions of an inch, medical stent manufacturers often deal with wall thicknesses measured in microns.

So imagine the challenge posed to those manufacturers that create the smallest of electrical components, like the resistors found in everything from TVs and laptops to toasters and the lights illuminating city streets. These components fall under two categories: thin and thick film. Those made of a thin film are often used in the most critical of components and are measured in angstroms, which is literally the measurement of layers of atoms.

In recent years, fiber technology has advanced to the point where the laser beam can be tuned and modified to reduce heat input, giving traditional metal fabricators a better cut outcome. For those fabricators that work with thin film, however, traditional fiber lasers even when modified can still input a detrimental amount of heat. Fortunately, a laser technology is available for these critical applications, one that incorporates a thin stream of water to keep heat input low and processing quality high.

The revolutionary Laser MicroJet process from Synova S.A. was developed in the 1990s by Dr. Bernold Richerzhagen, the company’s founder and CEO. The process combines a fiber laser with a hair-thin stream of water and was developed to overcome thermal damage, contamination, deformation, debris deposition, oxidation, micro-cracks and tapering in thin materials. By combining an otherwise “dry” laser with a thin jet of water – which essentially mimics a traditional laser beam’s optical cables – the water is able to cool the cutting zone while simultaneously removing material debris.

Appropriate applications include the production of thin-film resistors as well as products that fall under a range of markets: energy, aviation, watchmaking, medical and micromachining. It is also highly leveraged in the production of semiconductors, a major growth opportunity for U.S. manufacturers and fabricators in the very near future. ..."